Little known to most USA watch enthusiasts is the genius movement and watch manufacturing of Christophe Clare. If you have been interested in timepieces above the 50K mark you might actually be wearing one of his movements and not even know it. He has been making movements in a very secret fashion behind the scenes for 20 years. If you have a dream he can make it happen. Not many like him. A few of the Leviev watches are using Christophe Clare movements that I work on here.

We are talking about workshops that exude and permit not only dreams to happen, but sheer unstopable insane mechanisms that simply should not work on paper or inside CAD programs. In the luxury watchmaking world (that just like most other industries) computers do permit us to make dreams a reality as far as technological leaps and bounds, but the Watchmakers must assemble, troubleshoot and dream up these functions. It really still comes down to the abilities of the Watchmakers on staff, and a whole lottta’ money too!. 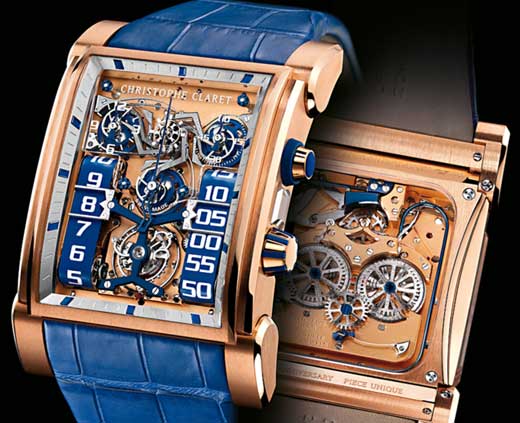 Just to show you how passionate Watchmakers and watch manufacturers are in obtaining perfection (we all have obsessive compulsive disorders at the highest level) I have an article regarding Clare manufacturing measuring instruments and workshops to warm you up for the technicals on the DualTow that follows.

Programmable by a built-in microprocessor, laser technology for measuring cutting tools ensures reliability even in extreme conditions, as a Swiss watchmaker has discovered.

In Le Locle, clean rooms and temperature controlled environments with noise absorbers are installed throughout the Christophe Claret’s workshops.

The components are manufactured in a controlled atmosphere where every movement is meticulously assembled by experts.

Precision to a one hundredth of a millimetre is standard; however the workshop often works to the scale of a micron or even a nanometre, which is the measurement for some digital controls.

The flow controls organise production from some 8,000 operative ranges, to which are added some 2,000 variations.

The batches are very small, sometimes only about fifty parts, launched at the rate of five/year with about 10,000 reference parts circulating within the factory in order to supply around forty different complete watches.

Three huge vertical rotary, automated storage and retrieval bins, hold over four million watch elements in the process of being finished or ready to be assembled.

The stock of machines meets all requirements in terms of milling, jig-boring, electro-erosion, laser cutting, profile turning, gear-cutting and burnishing.

The workshop includes 18 CNC machining centres (the oldest is only four years old).

The founder never skimps on any expense in order to be equipped with industrial tools at the forefront of technology with quality improvement programs working at all levels.

Multi-purpose machine-tools (prismatic and revolving parts) are preferred because they allow 3-, 4- or 5-axis milling.

Christophe Claret has the aim of completing each part in ‘one hit’ working to within a 5 micron tolerance band.

* Tool measurement – One aspect of the Le Locle factory’s operation is efficiency and manufacturing quality assurance: it makes systematic use of the Blum LaserControl NT-H for thousands of tools, drills, bits, taps and milling cutters that have to be examined and measured daily before use.

Programmable by the built-in microprocessor, this third-generation of laser technology for measuring cutting tools ensures reliability even in extreme conditions.

It provides maximum machining precision and the systematic verification of cutting edges at all rotation speeds.

Set up in the machining area, the Blum LaserControl NT-H optical system is sealed against coolant and swarf thanks to the air-controlled shutter that guarantees protection with minimum maintenance and low energy consumption.

Working on cutting tools including diamond shaped or CBN cutting edges, the Laser NT-H conducts tool pre-setting, measurement with or without contact, eccentricity management and marking of runner or taper defects without risk of collision.

The control also examines standard or special tools with the precise marking of the number of teeth when milling.

Everything is systematically integrated into the programming of the machines before production starts.

Blum adapts its LaserControl NT-H to every digital control and this automatically manages the operational cycles according to tool geometries.

A cycle consists of total tool measurement (length, diameter and profile of teeth) with one cycle for each tool.

The LaserControl NT-H conducts these measurements whilst rotating, thanks to high precision switches and its laser beam that focuses to within a radius of 0.03-0.06mm.

Production manager at Christophe Claret, Christophe Bouveret, said: “We have chosen the most effective system for measuring and controlling tool breakages in a highly-lubricated environment.

Above all we search for reliability.

The Blum system meets all of our criteria expectations as it is capable of coping with very small tool diameters to the scale of a tenth of a millimetre”.

Bouveret said that LaserControl has become indispensable for measuring all tools before machining.

Data is entered methodically into a table with coordinates of high precision that anticipate any tool breakage.

Previously, we wasted a considerable amount of time pre-setting by conventional means.

And, very importantly, it’s the automatic input of data and measurements into the machines’ digital controls that was until then, a manual task with risk of error”.

He said: “To summarise, it’s a system that allows us to guarantee quality while simultaneously achieving much higher productivity”.

Micro-engineering is a passion that has been driving him since childhood and this art of great accuracy is built into every watch.

Since 1987 he has supplied exclusive movements to prestigious watchmakers such as Guy Ellia and Jean Dunand.

Producer of several world ‘firsts’, the micro-mechanism artist developed and transposed his ideas in the spirit of client brands who assemble the movements.

In 1989, he created his own company at La Chaux-de-Fonds, in the Swiss Jura mountain region.

He then moved to Le Soleil d’Or above Le Locle, a destination that will now be supplemented by two new modern buildings dedicated to watch making.

From 17 employees in 2001, the factory now employs over a hundred staff with a technical research department that has grown five-fold in three years. 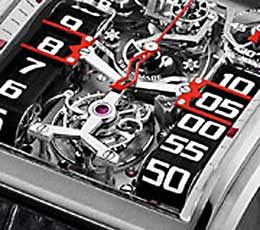 2009 is thus a jubilee year in the history of Christophe Claret SA, a milestone that its owner wished to symbolise by releasing an exclusive timepiece produced under the company brand name and distributed by the finest retailers worldwide. The DualTowis a faithful reflection of the watchmaking philosophy inherent to Christophe Claret. Housing several inventions including one patented innovation, this single-pusher planetary-gear chronograph with striking mechanism and tourbillonexpresses a combination of technical excellence and sophisticated aesthetics. It also embodies the merging of the wide variety of skills united within the company, since almost all operations involved in making itÂ  from movement development to the machining of the sapphire dial-bridgeÂ  have been performed in-house.

The Operating Functions and Make Up

Inspired by caterpillar-track vehicles, Christophe Claret has devised a mechanism enabling an unprecedented display of the hours on the left and the minutes on the right. Placed on either side of the watch, two rubber belts specially developed for the Manufacture feature numerals with a decidedly high-tech design. Above them, a coloured fork fixed to the tourbillon bridge and fitted with a tiny pointer creates a symbolic framework serving to read off the time.

These notched belts are driven by cylinders placed on either end. To intensify the impression of motion, the design of their sides is directly inspired by the wheel rims of the Bugatti T35. Inside, a screw-tightening module enables ultra-precise adjustment ensuring optimally smooth operation. In addition to this mechanism, the minute belt houses a fully integrated winding and time-setting system.

Representing a horological embodiment of power and energy, the DualTow is an ultra-refined machine for measuring time. With its original belt display of the hours and minutes, the model features an ultra-technical and classically elegant appearance. Technically speaking, the mechanical hand-wound CC20A movement boasts an impressive number of innovations and stylistic refinement. One particularly striking example is a gong that sounds each time the chronograph pusher is activated, in a playful allusion to the expertise of the Manufacture in the field of striking watches.

The mechanical hand-wound Calibre CC20A is endowed with an over 50-hour power reserve supplied by two barrels. Lined up in parallel in the centre of the movement, the barrel ratchet-wheels are also reminiscent of Bugatti T35 wheel rims with their eight iconic spokes. An indicator visible on the back of the watch signals the remaining energy available. 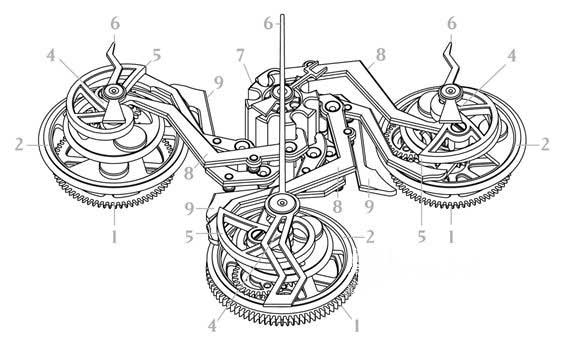 When the chronograph is activated, the column wheel (7) moves one notch forward and raises the reset hammers (8). The start brakes (9) then drop to block the three satellite- holders (2) and the hands (6) begin turning immediately, since the energy is transmitted from the entry wheels (1) to the exit wheels (4).

A second push halts the running of the mechanism. The column wheel moves another notch forward and lifts the start brakes, which releases the satellite-holders. The stop brakes then drop to block a disc connected to the hands.
At the third press, the column wheel moves yet another notch forward and the stop brakes lift to release the exit wheel. The hammers then drop onto the cams (5) and cause them to rotate until the hands return to zero.
The chronograph cycle is thus complete and the system is ready for another measurement.
Building on this successful innovation, Christophe Claret has chosen to further enhance the refinement of this calibre by adding a striking mechanism signalling the chronograph start, stop and reset operations.

Like all the movements developed, fine-tuned and produced by the Manufacture, each part of Calibre CC20A is crafted in accordance with the principles of fine watchmaking. Confirming the prestigious stature of the DualTow, they are bevelled, hand-drawn, mirror-polished and coloured in keeping with the noblest traditions of hand workmanship. Depending on the colours chosen by the customer for his own particular model, the parts are blued, anodised or treated by electroplating.

The DualTow shows a different face on each of these unique watches. In step with current demand and the new luxury codes that give customers the freedom of inventing their own version of an object, Christophe Claret offers them a chance to personalise their own DualTow on the DualTow website.