Our Swiss friends at Eterna research and development have discovered an entirely new way to mount the barrel. I would love to have a rip down on this movement to see the end play between the bearing and barrel arbor after a simulated 3 years of use. Looks like the balls are ceramic as well. I wonder if this will end the oblong wear (such as what happens on Rolex barrel bushings). Nice job Eterna we thank you from our benches! Some really interesting technicals to look at here, so make sure you do. Read on Watchmakers and enthusiasts. 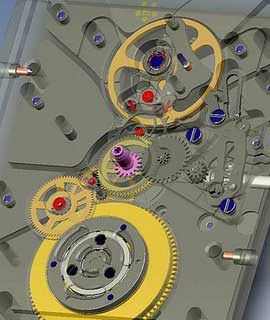 Back in 1948, Eterna astonished the watchmaking world with its ball bearing-mounted low-friction rotor system for self-winding movements, known as the Eterna Matic. A good sixty years later, Eterna is once again making news with the same principle, this time involving a ball bearing-mounted barrel. This dual ball bearing represents a quantum leap in the quality of the gear train mechanism, explains Eterna’s Technical Director Patrick Kury.

To understand the improvement, you have to picture the way a normal watch movement works: with a conventional winding mechanism, the barrel arbor is located in the middle of the spring barrel, where it rotates when wound and thereby tightens the spring. The movement runs on the basis that the barrel revolves around the static arbor to deliver a steady supply of energy to the gear train. This process exerts immense pressure on the arbor. A fully wound spring barrel can generate torque in excess of 1000 gram/millimeters (10 Newton millimeters).

To improve the system, Eterna has separated the winding process from the gear train. The winding stem, mounted on two ball bearings, is integrated into the winding mechanism; it is not directly coupled to the spring barrel, which is mounted in an overhung position on a ball bearing incorporated in the gear train mechanism. The resulting rolling motion entails less friction and less loss of energy. The bearing’s minuscule 0.3 millimeter-diameter balls are fashioned from zirconium oxide, a ceramic material which, like tempered steel, has self-lubricating properties.

This invention is both simple and efficient: vertical play and canting are reduced by up to a factor of ten compared to conventional designs.

Aside from the advanced technology of the movement, the Madison Three-Hands is a compellingly attractive timepiece. Its polished stainless steel case bears a black sunray-brushed dial featuring rhodiumed indices. The black alligator leather strap with folding clasp makes the watch look particularly elegant. Ticking away inside the Madison is Eterna’s own calibre 3505 manual-winding movement, which incorporates the Eterna Spherodrive and provides 56 hours of power reserve. Thanks to the deliberately understated design of the watch, the Eterna Spherodrive innovation takes pride of place, with the individual balls of the bearing being visible through an aperture at 6 o’clock. The Eterna Spherodrive will feature in all the company’s future innovative movements.